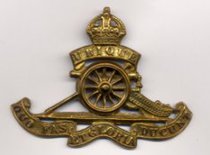 The Brigade was the basic tactical unit of the field artillery of the British army in the Great War of 1914-1918. It was composed of a Brigade Headquarters and a number of batteries of guns or howitzers. At full establishment, a brigade of 18-lbr field guns consisted of 795 men of whom 23 were officers. For a 4.5-inch howitzer brigade, this was 755 and 22. The following notes refer to the establishment of a field gun brigade. Where howitzer brigade details differ, they are highlighted.

Brigade HQ also included a Sergeant-Major plus two Corporals, two Bombardiers, nine Drivers, 7 Gunners, a Clerk, and a Trumpeter. These filled roles as signallers, telephonsists and assisted with range-taking duties. A Corporal and 3 privates of the Royal Army Medical Corps were attached for water duties; 8 Gunners acted as Officers Batmen (personal servants), and 2 as Orderlies for the Medical Officer. The Brigade HQ was in command of 3 Batteries and an Ammunition Column.

All entrants to the Royal Regiment, be it RGA/RFA/RHA joined as 'Gunners', however if they were tasked in training/at their Battery to 'drive' the Gun and Limber horses, they were then titled as 'Drivers' - responsible for two horses. The ranks were at the same level. 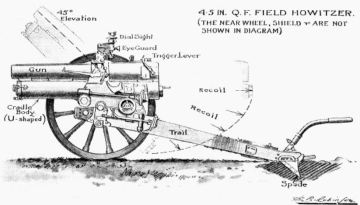 Usually lettered A to D, each of the Batteries numbered 198 heads at full establishment. Each was commanded by a Major or Captain, with a Captain as Second-in-Command, and 3 Lieutenants or Second-Lieutenants in charge of 2-gun sections. Battery establishment also included a Battery Sergeant-Major , a Battery Quartermaster Sergeant , a Farrier-Sergeant, 4 Shoeing Smiths (of which 1 would be a Corporal), 2 Saddlers, 2 Wheelers, 2 Trumpeters, 7 Sergeants, 7 Corporals, 11 Bombardiers, 75 Gunners, 70 Drivers and 10 Gunners acting as Batmen. 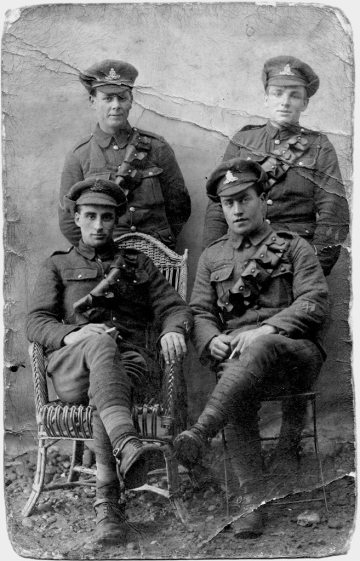 Major Frederick Bligh, formerly with the R.H.A, rejoined on the outbreak of war after 21 years of retirement and trained "B" Battery,154th Brigade, R.F.A. "in connection with the Ulster Division" at Okehampton until they were ready to leave for the front in October, 1915. On the last day of training he fell ill with appendicitis and died soon afterwards.

His entry in De Ruvigny (Roll of Honour) said of the unit he trained that "their splendid work ever since is testimony to his work".

Below is a photo of Harry's battery. The assumption is that it was taken towards the end of the war in 1918.  Read what he has written on the back which suggests a very large majority of the men he joined up with had lost their life by this stage of the war.  Harry is standing on the front row, on the left shoulder of the commanding officer. 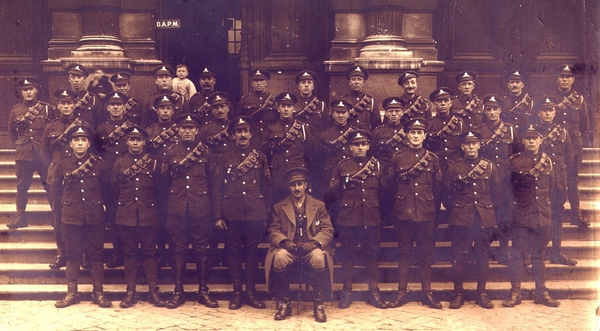 The Ammunition Column numbered 158 heads. Commanded by a Captain, with 3 Lieutenants or Second-Lieutenants, the job of the BAC was to bring ammunition and other supplies to the Battery positions from the Divisional dumps. It was divided into two sections. BAC establishment also included a Battery Sergeant-Major , a Battery Quartermaster Sergeant , a Farrier-Sergeant, 4 Shoeing Smiths (of which 1 would be a Corporal), 2 Saddlers, 2 Wheelers, a Trumpeter, 4 Sergeants, 5 Corporals, 5 Bombardiers, 30 Gunners, 96 Drivers and 3 Gunners acting as Batmen. Brigade Ammunition Columns disappeared in May 1916, when they were reorganised into Divisional Ammunition Columns.

Also on the strength of the Brigade

Included in the figures shown above were 34 Acting Bombardiers (one stripe; the equivalent of a Lance-Corporal). They were the Medical Officer's orderly, plus 9 in each Battery and 8 in the BAC. Each Brigade had a detachment at its Base Depot which did not take the field when the Brigade was on active service. The Base Detachment consisted - in theory - of a subaltern, 2 Sergeants, 5 Drivers and 41 Gunners to form a first reinforcement (to make good Brigade casualties or other losses); 4 Storemen, and a Sergeant-Clerk (who was on the headcount of the Records Section of the Adjutant-General's Office).

At the outbreak of war, field gun batteries of the regular army had 6 guns, and those of the Territorial Force 4 guns. The standard weapons, which did not alter during the war other than by technical improvements, were the 18-lbr field gun, and the 4.5-inch howitzer.

Changes during the war

In 1914 a Division had 3 Field Brigades and 1 Howitzer Brigade. The Howitzer Brigades at Divisional level were broken up during May 1916, and the sections allocated to join the field gun Brigades, usually of the same Division. In Harry's case 154th B Battery became the howitzer battery of the 173rd Brigade and was renamed 173rd D Batery.  In January 1917, one of each Division's three Brigades was taken under Army control. Brigade Ammunition Columns disappeared in May 1916, when they were reorganised into Divisional Ammunition Columns.

As the war progressed it became icreasingly rare for a Brigade to be at full establishment with regard to men. Equipment was lost, damaged or destroyed, and not always replaced quickly or fully. Field guns and howitzers were sometimes lost or abandoned to the enemy, if his infantry penetrated the infantry positions. The guns would almost always be destroyed first if possible, by removing the gunsights or exploding a charge in the barrel or breech

How the British Artillery developed and became a war-winning factor 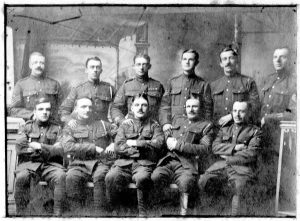 A photo of Harry, front left, with his fellow serjeants. a number of whom must have perished or been badly wounded before the end of the war, as they don't appear on the 1918 battery photo above. Harry is seated, far left. 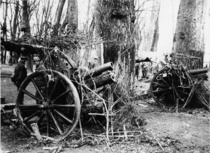 The QF 4.5 served throughout the Great War, principally with the Royal Field Artillery, beginning with 182 guns in 1914, with 3,177 more produced during the war.

At the beginning of the First World War a Brigade of three 6-gun howitzer batteries was part of each British Infantry Division. In February 1917 Divisional artilleries were consolidated into two field brigades each with three batteries (A, B, C) of 18 pounder guns and one battery (D) of 4.5-inch howitzers. The balance were formed into Army Field Brigades with the same organisation.

Following experience gained in the Battle of the Somme in Summer 1916, its role on the Western Front was defined in January 1917 as "neutralising guns with gas shell, for bombarding weaker defences, enfilading communications trenches, for barrage work, especially at night, and for wire cutting in such places which the field guns could not reach

During advances such as at Messines in June 1917 the gun was typically employed in "standing barrages" of HE on the enemy forward positions ahead of the 18 pounders' creeping barrage, and gas shelling following bombardments

There were 984 guns in service on the Western Front at the armistice and 25,326,276 rounds had been fired

4.5-howitzers were also used by British batteries in the campaigns in Gallipoli, the Balkans, Palestine, Italy and Mesopotamia

More information on the 4.5-inch Howitzer

The Unsung Hero of the Western Front - The British Horse 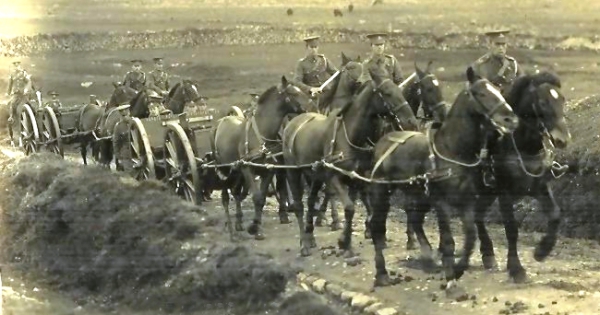