I remember my grandfather as a man of great character and humour, held in great regard by all who knew him.  He always seemed ot know what was going on, always maintained an interest in farming matters and kept an eye on the Yorkshire and Test match cricket scores.  He smoked a pipe, the odd cigarettes, only ever drank in moderation and never swore.

He is probably remembered by many in the Almondbury area for his resounding shout of "Milk" and unfailing good humour.

After his 4 years away from home in WW1 Harry didn't show much interest in travelling, in fact he never journeyed anywhere much at all after arriving in Almondbury (where he was only intending staying for a fortnight in the first place) other than to return to his home district of Howden and occasionally the Great Yorkshire Show.

William Henry (Harry) Stevens was born at Blacktoft 17th July 1896, the oldest son of William and  Sarah Jane Stevens (born Turner).  He grew up in Blacktoft and upon leaving school aged 12 or 13 also left home to work and board at the nearby Blacktoft House Farm, (see census forms below) and this is when he  became "Harry" as there was already a William working there .  After the war he returned to live and work on the farm at which his father was now bailiff at nearby Balkholme. He married Annie Holt, also of Balkholme, in late 1920, some 18 months or so after leaving the army.  Both families had been involved in farming in the Howden area for generations.  See 1901 and 1911 census forms below.

William Henry grew up with with 2 sisters, 3 brothers and 2 half-brothers.  See the family tree, which makes things a little clearer. Both older half-brothers also volunteered for duty in WW1.

Sarah Jane had 2 children prior to her marriage to William, they were Harry T Turner and Herbert. The census forms for 1901 and 1911 gives more information lower down this page.

Turner or Stevens?  It is somewhat confusing as Harry T (Tomlinson) Turner and Herbert were clearly born out of wedlock and Herbert seems to have used the name Stevens until he joined the army when he became Turner - yet on his 1918 gravestone (at Howden Minster) he is Herbert T Stevens. In the 1911 census he appears at both Blacktoft House as Stevens and also at his Turner grandparents' home as Turner.

Henry or Harry?  Harry T Turner is proving difficult to trace.  He grew up with the Turner family and married in 1916 to Mabel Jane Amos Turrell, changed his name to Henry at some stage, had a son Bernard in 1920, possibly 3 more children and probably lived until 1973.  It seems very likely he fought in WW1 (as Henry T Turner), in the RFA and was discharged in June 1915 as pemanently unfit.

Harry never learned to drive, not even a tractor.  Until the age of 61 (when he started working for his son Harry) pulling power as far as he was concerned was provided by horses and he was involved  with them every day of his life, from at least school-leaving age (and probably long before) when he started work at Blacktoft House Farm. Even on the smallholding at Broken Cross, Almondbury he used to plough an area of field where he grew fruit and vegetables with a one-horse plough using the same horse which pulled the milk float. 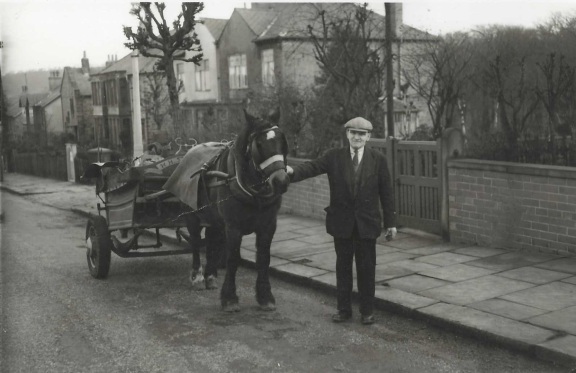 This photo appeared in the Huddersfield Daily Examiner with the accompanying text - "Lowerhouses is one of the villages where the arrival of the milkman, Mr Harry Stevens, of Broken Cross Farm, Almondbury, is still heralded by the clippety-clop of horse's hooves.  Mr Stevens has been delivering milk in the district for more than 20 years."

After the marriage at Howden the couple then moved to Almondbury, Huddersfield, (where Annie's sister had already moved) and brought up their 7 children there

They lived initially at Annie's sister cottage at Low Common, then found a cottage at Bank Foot where they had their first 3 children and then moved into what was then a brand new council home on Farfield Road where the final 4 children were born. In 1938, the final move was made to Broken Cross (Farm), a smallholding with 5 acres and a number of farm buildings.

The eldest daughter Dorothy along with her husband and son were killed in a bombing raid on Plymouth in WW2 and Mabel, who suffered with epilepsy, died as a teenager.

The remaining 5 children produced 11 grandchildren, most of whom lived locally and he spent time with them very regularly, (Pauline's family emigrated to Canada in the 1960s).

Harry was an extremely hard working man.  In his whole working life it would appear that the longest period spent away from work was a 2 day trip to visit his mother at Balkhome.  He worked 7 days a week, landing the job of running the farm side of matters at Blackburns Plant Nursery and Farm, Fenay Lane.  Later, he was involved in the running of Townend Farm and their milk deliveries until the land was taken for housing - the development of the Fernside council estate.

He continued with the milk round, delivering with horse-drawn float until at the age of 61 in 1957 when his son, (also a farm worker), became a dairyman buying Harry's business from him and adding it to another round he had also bought.  From then on until his retirement at the age of 80 he worked for his son (the horse and float was sold in 1957?), working on the milk round and looking after hundreds of chickens at Broken Cross.

Harry had a great depth of knowledge regarding all things farming and a few more strings to his bow too, there were a lot of mouths to feed so he could be found thatching, gardening, ringing bulls and castrating pigs and goose plucking.  He was a passable barber too, apparently!

He was also highly respected for his (non-qualified) vetinary advice on farm animals, possibly his army training stood him in good stead here as they were trained and expected to keep their horses fit for purpose.

His parents were god-respecting people who tried to treat the Sabbath as a day of rest (as far as was possible as farmers) and they would always attend church/chapel on a Sunday.  None of their zealous behaviour encouraged Harry and he had very little time for religion.  Maybe as a result of his WW1 experiences? 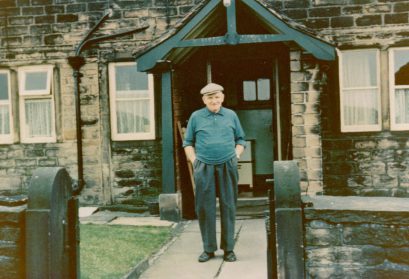 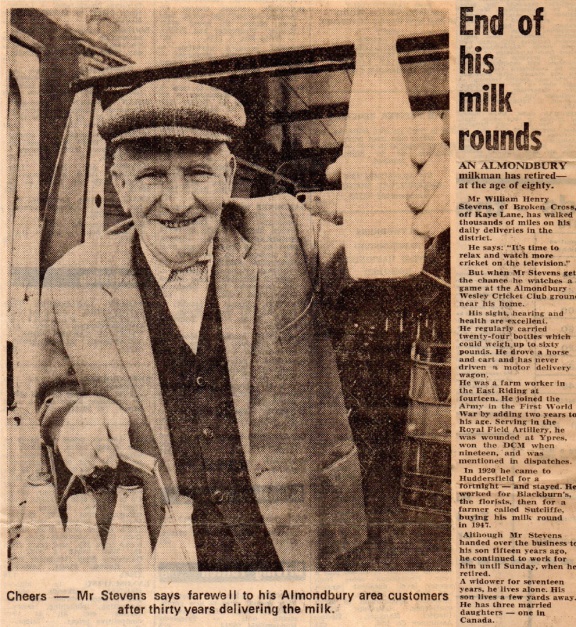 On Display at Blacktoft Church (rather inaccurate, unfortunately) 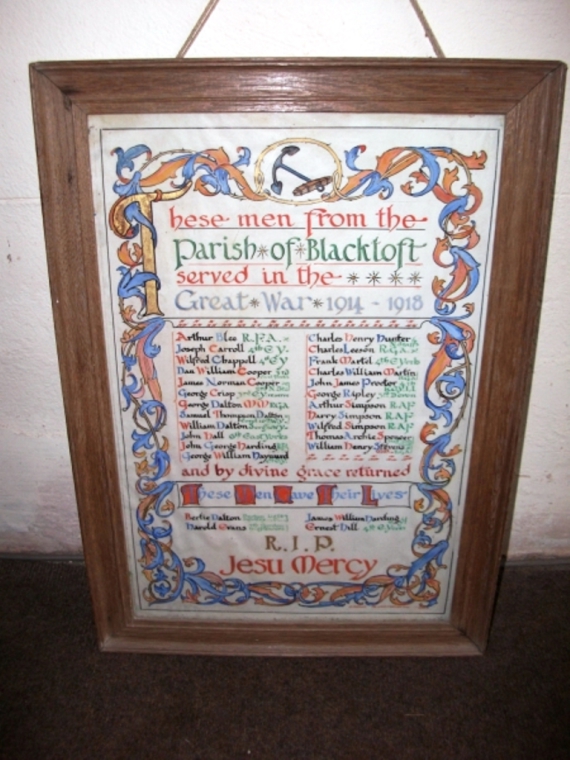 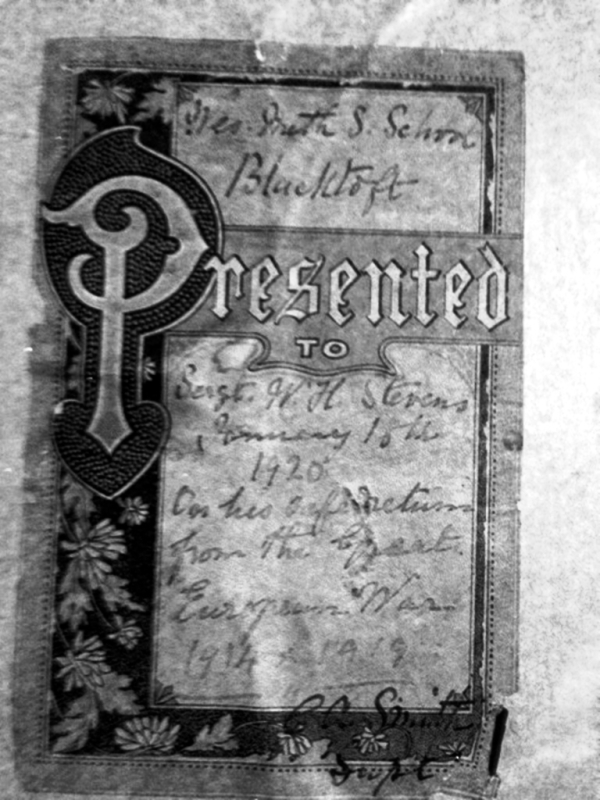 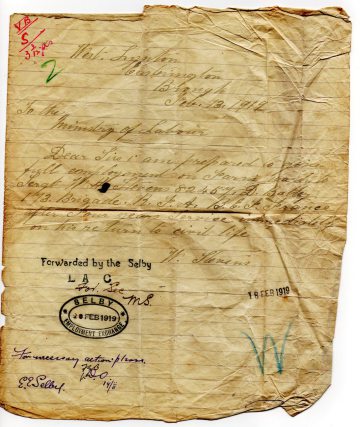 To aid Harry's application to leave the army his father, William Stevens, farm bailiff by this stage at West Lynton Farm, Balkholme, Eastrington, posted this letter to the ministry of labour to confirm that there was employment withing for him at home, on the farm.

This farm was situated almost directly opposite the one which was now owned and run by Freeman Holt, the father of Harry's soon-to-be bride Annie.