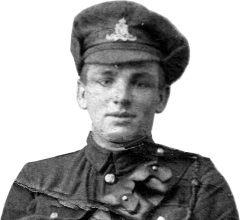 What is known at this stage about his enlistment is that he was transferred after signing up at Howden to Glasgow RFA No 6 Depot, as his army number was given to him there on the 16th January.  We do not know for certain where he was for the next few months training, (his service number suggests Glasgow was his starting point only) but we do know that he was assigned to the Royal Field Artillery 154th Howitzer Brigade, B Battery as a 'Driver', (the rank of Private was not used in the RFA). The 154th, an East London Brigade, was not raised until around May 1915 and we believe he travelled initially to Woolwich No 4 depot, to train with this new brigade and then on to Bordon, No 7 Reserve Brigade TF.  He left for France on the 25th November 1915 from Bordon, via ship from Southampton.

The 154th Brigade R.F.A. were formed by the British Empire League, of which one of the moving spirits was General Sir Bindon Blood. They were recruited chiefly from Croydon, Norbury, and Sydenham so it is likely many of Harry's fellow soldiers were Cockneys who know doubt found his broad Yorkshire accent as unintelligible as he found theirs! 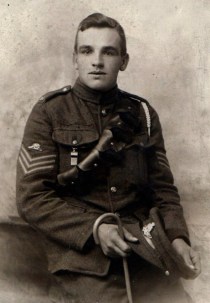 William Henry, (known as "Harry") enlisted  at Howden, in the East Riding of Yorkshire on the 13th January 1915, at the age of 18 years and  181 days.  His employment on the 1911 census suggests he was living and working as a "horseman on a farm" along with his elder half-brother Herbert at Blacktoft House, Blacktoft, the village in which he grew up.  Family background.

Herbert also joined up in 1915, in the East Yorkshire Regiment but was to be eventually discharged on medical grounds (gas poisoning?) and died weeks afterwards aged 25 in Dec 1918 from influenza.

Perhaps Harry was intending joining half-brother Herbert, or his mates, in the East Yorkshire Regiment when he joined up, as the story goes that he informed the recruiters that he couldn't ride a horse, which was obviously untrue when they put him on one to check him out!  So to the RFA it was, as a driver, controlling 2 horses.

A driver was a soldier trained in the management and use of horses. The six horses drawing the gun, or wagon, were driven by three drivers, all on the nearside horses, and much training was required before drivers would be rated as competent. The drivers, of course, also looked after the horses and the management, condition and state of health of these animals was regarded as one of the most important functions in the battery.

The 154th Brigade was formed at Croyden and  Harry willl have spent some time training at Woolwich and Borden, near Aldershot and it was from this training camp that they departed for France on the 26th November, to become part of the 36th (Ulster) Division.  Battles and theatre of war of  154th/173rd Brigade.

Harry fought in each of these well-documented battles: -

Third Battle of Ypres or "Passchendaele" (July to November 1917) 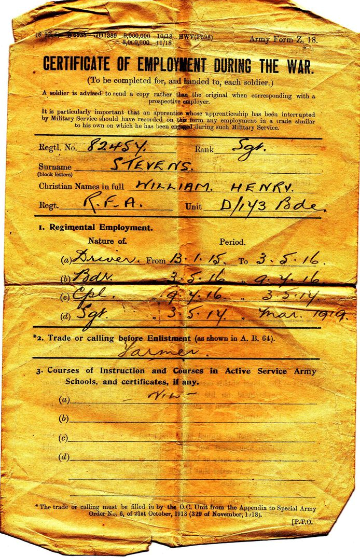 Certificate of Employment During the War, Army Form Z.18.

Harry held the rank of serjeant by 1917.  The correct spelling at the time was serjeant, changing to sergeant after the war end.  The promotion ladder in the RFA consisted of: Dvr driver, Gnr gunner, Bdr bombardier (one stripe), Cpl corporal (two stripes) Sjt serjeant (three stripes with a gun above).  The only reply from Grandad I ever got when I asked him why he was made serjeant was that he got the promotion because there was no-one else left to promote!

His Army form Z.18.tells us when his promotions took place. 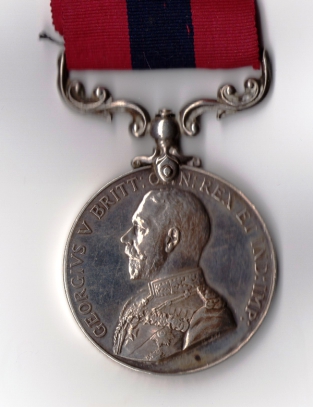 The D.C.M. was the first official medal award to recognise an act of gallantry in the field by a member of the armed forces who was below the rank of officer. It was the other ranks' equivalent of the Distinguished Service Order.

The D.C.M. was awarded for gallantry in the field in the face of the enemy. Other ranks in the British Army and also non-commissioned ranks in Commonwealth Forces were eligible for this award.

The reverse of the medal bears the inscription “For Distinguished Conduct in the Field”. A bar carrying the date of a subsequent deed could be added to the ribbon until 1916 when the bar was changed to a laurel wreath. A recipient of the award is entitled to used the letters D.C.M. after their name. 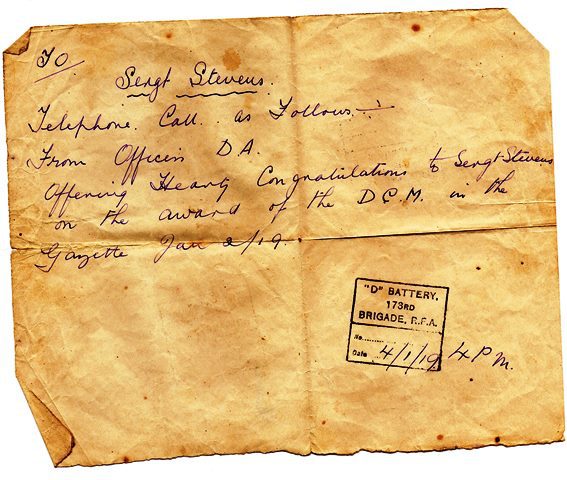 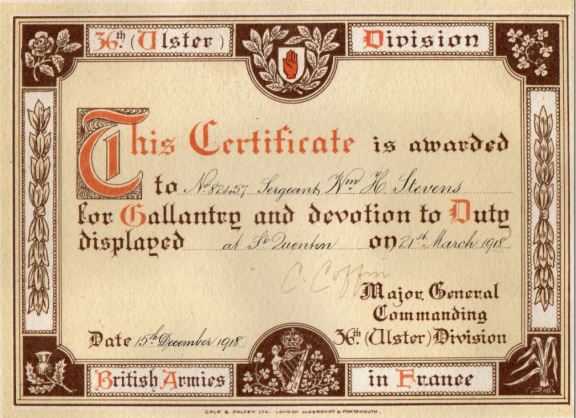 This certificate refers to a noteworthy act of 'gallantry or service' by Harry on the 21st March 1918 at the battle of St Quentin.

This tyoe of certificate was first issued in April 1917 for actions on 1 July 1916 and the design changed at some time in early 1918.

The battle that he earned the divisional gallantry certificate in was The First Battle of the Somme, 1918.

There is an account of that battle in the divisional history by Cyril Falls and there is also a summary of the actions of 173 Brigade RFA in the war diary on this website.

It is possible that Harry was one of the men that went forward to gain communication with the batteries when communications were lost and that was why he earned the divisional gallantry certificate.

In addition to the DCM Harry received 'Pip', 'Squeak' and 'Wilfred'

The medal is a four pointed star of bright bronze, ensigned with a crown, with a height of 50mm, and a maximum width of 45mm.

The obverse has two crossed gladii (swords) with blades upwards and a wreath of oak leaves, with the Royal Cypher of King George V at foot and an overlaying central scroll inscribed "1914–15".

The reverse is plain with the recipient's number, rank (driver) and name

The ribbon has the red white and blue colours of the Empire, in shaded and watered stripes.

All men who served in the main theatres of war qualified for the British War Medal, also known as squeak, as did those who left their native shore for service in, for example, India.

The medal is silver and circular. A truncated bust of King George V is on the obverse, while there is a depiction of Saint George on the reverse.

The soldier's regiment and number are inscribed around the rim.  Harry's is inaccurate in that it says RA and not RFA.

It was decided that each of the allies should each issue their own bronze victory medal with a similar design, similar equivalent wording and identical ribbon.

Approximately 5.7 million victory medals were issued. Interestingly, eligibility for this medal was more restrictive and not everyone who received the British War Medal ('Squeak') also received the Victory Medal ('Wilfred').

The recipient's service number, rank, name and unit was impressed on the rim.  On this particualr medal there is presumably and error in that it denotes RA and not RFA. 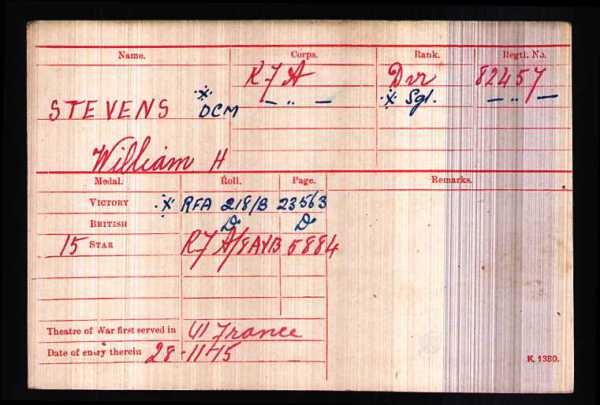 Inventory, Nominal Roll, Horse Records & Other Of Harry's Stores Paperwork in the War

Download pdf of stores paperwork
For a better view, easy to zoom there is lots of interesting information, such as the names rank and number of the soldiers in the Sub-section, descriptions and details on the horses mules, stores lists, etc
Admin Paperwork etc.pdf
Adobe Acrobat document [916.4 KB] 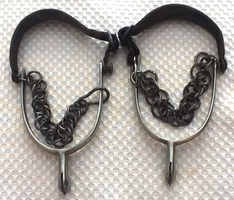 Harry's spurs which returned to England with him after the war 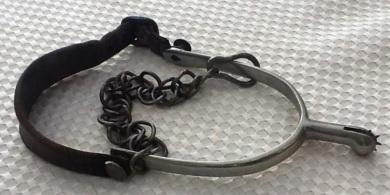