George was a proper gentleman, extremely well-mannered, helpful, patient and as honest as the day is long.  Always smartly dressed, clever with both his head and his hands he had an enquiring mind and was interested in a diverse range of activities, including gardening, travel, small scale fabrication of various items.  He was a great family man and always kept in regular touch with his close relatives, travelling as far as the US in his late seventies to visit his niece's extended family.

Whilst never talking about the war to me, he did talk about the places he spent time in and maintained a friendship with a family in Italy he got to know, whilst posted there, for much of his life.

It is just so hard to imagine that this quiet, unassuming gentleman was a stretcher bearer for 3 years, regularly putting his life on the line, going over the top on the Front Line into no man's land, saving the lives of others by retrieving the wounded and dead and giving first aid where possible in the most horrific circumstances. 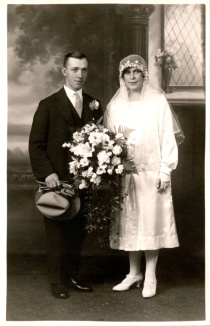 George married Mary Emma Hyde from Manchester in the summer of 1928, they settled in Gledholt Bank, Huddersfield and they had 2 children, William and Kathleen and 7 grandchildren.

Mary's father was born and raised in India, arriving in England to seek his fortune around the age of 20.  He became a great friend of George's father and we are to presume that is how George and Mary met.

George lived to the age of 82, passing away in Sept 20th 1978 having lived the last few years of his life at Eastlands, Almondbury, in the same village in Huddersfield as Harry Stevens and Kathleen.

George's family tree, note his cousin John Crabtree - probably the cousin he mentions in his war diary, whom he used to visit. 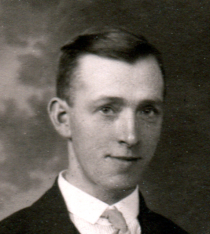 George was the second child of Joseph William and Annie E Crabtree.  There were 6 children and George was the oldest of the 4 boys and the only one old enough for enlistment for war.  They all grew up at Thistle Hill, Kirkheaton, Huddersfield.  Census forms for 1901 and 1911 below.

Joseph William was originally from Rochdale, Lancashire with a family background of textiles workers situated around the Lancashire - Yorkshire borders.  His specific trade was 'mohair plush weaver' (velvet?).

The Crabtree family were members of the Independent Order of Rechabites, a Friendly Society founded in England in 1835 as part of the wider British temperance movement to promote total abstinence from alcoholic beverages and as far as we know George was indeed teetotal for the whole of his life. It is not known whether he was actively involved with the Rechabites in his post-war life, probably not.  More info on Rechabites 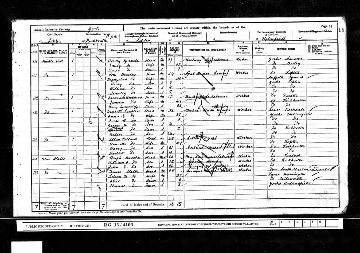 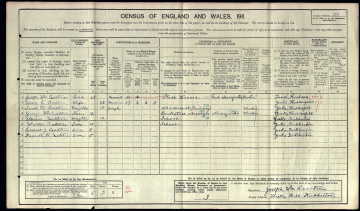 George was a bright and intelligent youngster but jobs were scarce and a defined career path was difficult.  His occupation on the 1911 census was listed as 'bookstall messenger' for newsagents and when he joined the army he was a 'mule winder' in the mill.  He also is known to have worked part-time in a butchers shop and in a bicycle repair shop at Waterloo.

On leaving the army George commenced work at Hudderfield Railway Station, the railways were still run by the government at this stage (more) and was to remain there until his retirement at 65.  He carried out various duties including at one stage as acting station master at Bradley Station but was to never achieve his goal of achieving the prestigious position of station master at Huddersfield, complete with uniform and house.  He passed the neccessary exams but thte story passed down is that he was actually too short of stature, (he measured around 5'6").  It would be great to know if there really was a height requirement.

He certainly knew how to stand up for his rights as there is also a story about him successfully getting the local MP involved in his case when, after a period off work, due to angina, not long before retirement in 1961, he resisted all attempts to post him to Oldham station on his return to work as his position at Huddersfield had been filled in his absence.

A rail employee was entitled to buy rail tickets at 25% of the public price, which meant that for all of his working life, George was always interested in travel and was able to use the railways for cheap travel for holidays and trips for himself and family members.  He never had a car but did get a driving licence in the 1920s and ran a motorbike and sidecar ('combination', awaiting photos). 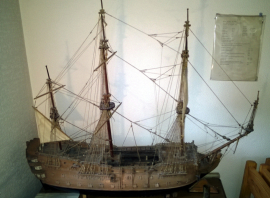 George along with Frank, his youngest brother were keen on building model yachts and sailing them.  Later in life they decide to embark on the huge project of building a 1: 60 scale model of HMS Royal William, originally HMS Prince, rebuilt and re-launched 1719.  Every little part of this model was fashioned by George or Frank and not finished until after Frank's death.  I remember Grandad with his lathe in the cellar making all sorts of bits and pieces for it but didn't really appreciate as a child just what an undertaking this was and how much skill and patience was involved, (especially as his hands were extremely shaky).  You can actually buy a model of this ship, with all the parts ready-made for assembly, for around £1100 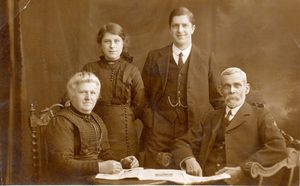 Mary on Hyde Family photo around 1920?