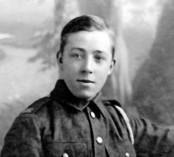 George was assigned to the regular army 15th Field Ambulance as a '(stretcher) bearer' and according to entries in his diary also took on the duties of 'orderly'.  The 15th field ambulance, (not a vehicle, a mobile front line medical unit) was attached to the 15th Infantry Brigade, assigned  to the 5th Division.  The Field Ambulance was a mobile unit of the Royal Army Medical Corps. It was situated quite close behind the fighting front, and received wounded and sick men. Some had received rudimentary treatment at the front-line aid posts.  George's role as bearer was extremely hazardous, many of his comrades were killed and injured on the battlefields as they removed the dead and injured whilst under enemy fire.  More info on the WW1 Field Ambulance.

There are no specific details available on when he arrived in France but it was almost certainly very early in 1916, so he will have spent his time with the 5th division as below:-

In late 1915, many units were switched for those of 32nd Division, a newly arrived volunteer formation. The idea was to strengthen ("stiffen" in the jargon of the time) the inexperienced Division buy mixing in some regular army troops; even though by now many of the pre-war regulars had gone and the regular battalions themselves were often largely composed of new recruits.

1916
March 1916 saw a move, with 5th Division taking over a section of front line between St Laurent Blangy and the southern edge of Vimy Ridge, in front of Arras. This was a lively time, with many trench raids, sniping and mining activities in the front lines. When the Franco-British offensive opened on the Somme on 1 July 1916, the 5th Division was enjoying a period of rest and re-fit and was in GHQ Reserve. However, this restful time was not destined to last:
The Attacks on High Wood*
The Battle of Guillemont*
The Battle of Flers-Courcelette*
The Battle of Morval*
The Battle of Le Transloy*
The battles marked * are phases of the Battles of the Somme 1916

By 5 October 1916 the Division had left the Somme and was holding a quieter line near Festubert. There was a constant threat from enemy artillery and sniper fire, but in comparison with the Somme it was a relatively tranquil period that lasted until March 1917.

On 7 September 1917 the Division was relieved and moved out of the line for a period, being sent next to join the great offensive in Flanders

A major change now occurred with 5th Division being one of five British formations selected to be moved to Italy. This was a strategic and political move agreed by the British Government at the request of the Allied Supreme War Council, as an effort to stiffen Italian resistance to enemy attack after a recent disaster at Caporetto. Many diaries at this time, by men who had witnessed slaughter in the floods of Passchendaele, talk of the move and Italy as being "like another world". Much work was done preparing to move into the mountainous area of the Brenta, but eventually the Division was instead moved to the line along the River Piave, taking up positions in late January 1918. Unfortunately this pleasant period was not to last, for the Division was recalled hurriedly to France, once the enemy had made an attack in overwhelming strength on 21 March.

On 14 August 1918 the Division was withdrawn for rest and placed in GHQ Reserve.

The Division remained in the area of Le Quesnoy until mid-December 1918, as demobilisation commenced. On 13 December, the Division began a march into Belgium, eventually to the area between Namur and Wavre. The first men were demobilised on 22 December and more followed at regular intervals through early 1919. 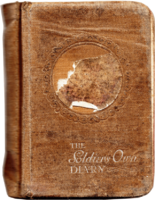 George kept a diary, a small  7 days to a view diary issued to army personnel in which he makes a number of notes and comments.  The complete diary for 1917 is still intact and a few months of the 1918  diary survived too.  A 'must-read'.  All the entries are available for download, see below.

Some diaries record little more than daily losses and map references whilst others are much more descriptive, with daily reports on operations, intelligence summaries and other material. The digitised diaries cover activity in France and Belgium.

The diaries sometimes contain information about particular people but they are unit diaries, not personal diaries. A few contain details about awards of the Military Medal and the Meritorious Service Medal.

Many maps and plans were included in the original diaries but some confidential material was removed before the files were made available. This accounts for the absence of some appendices referred to on the covers of many diaries.