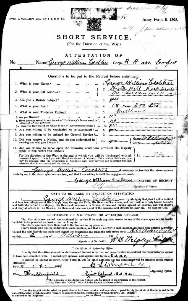 George, according to his signing up papers, was a mill-hand (a mule winder), living with his parents and siblings at Kirkheaton, Huddersfield and enlisted on October 2nd 1915 at the age of 18 years 300 days.  At this stage the requirement was still a miniumum age of 19 for active service overseas and conscription was not to start until January 1916.  Family background.

This image is a copy of his signing up papers which clearly show he signed up on the 2nd Oct 1915 but the month on the bottom section of the form which indicates he was assigned to the RAMC is not clear, one has to assume it reads 5/11/15.

He signed up under the Derby scheme, see details

"he would be assigned to a Group based on his year of birth (see Table below), and then placed in the Reserves – specifically Army Reserve Class B - without pay and allowances with the exception that he received one day’s pay at infantry rates for the day of attestation, which The Times newspaper of 1916 placed at 2/9d.  The new recruit would be issued with a card - Army Form W.3194 which recorded his Group details and he would then be allowed to return to his home and his employment until such time as his Group was called up"

George was assigned to the 15th Field Ambulance RAMC which was attached to the 15th Brigade of the Royal Infantry, which formed part of the Fifth Division.

His initial training was at Ripon and then futher training was at Royds Hall, Paddock, a mansion owned by Huddersfield Corporation, which was used as a hospital in WW1, later becoming a grammar school, numbering Harold Wilson amongst its pupils.

More about their wartime movments and battles 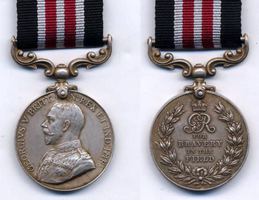 The Military Medal (MM) Award For Bravery In The Field

This Level 3 Gallantry Medal was established during the First World War on the 25th March 1916 and introduced in the London Gazette issue 29535, (back dated to 1914) to personnel of the British Army and other services, and personnel of Commonwealth countries, below commissioned rank. It was the other ranks' equivalent to the Military Cross (M.C.), (which was awarded to Commissioned Officers and, rarely, to Warrant Officers, who could also be awarded the M.M.).

This military decoration was awarded to G W Crabtree for acts of gallantry and devotion to duty under fire or for individual or associated acts of bravery.

"Auntie Mabel told me after his funeral that Dad thought the award was after an occasion when our army was withdrawing (not retreating!) and some wounded had been left behind when a stand was made after they crossed a bridge over a river.

Dad and his stretcher bearer partner volunteered to make several trips into no-man's land under heavy shell fire to bring wounded in. This was not specified in the citation but although they were working under fire a lot of the time he thought that this was the action that probably prompted the recommendation for an award.

He turned down a presentation in London and even one by the Mayor of Huddersfield."  Bill Crabtree (son).

Conferment of the medal was announced in the London Gazette 16/12/1919 and G W Crabtree earned the right to add the letters M.M. to his name. 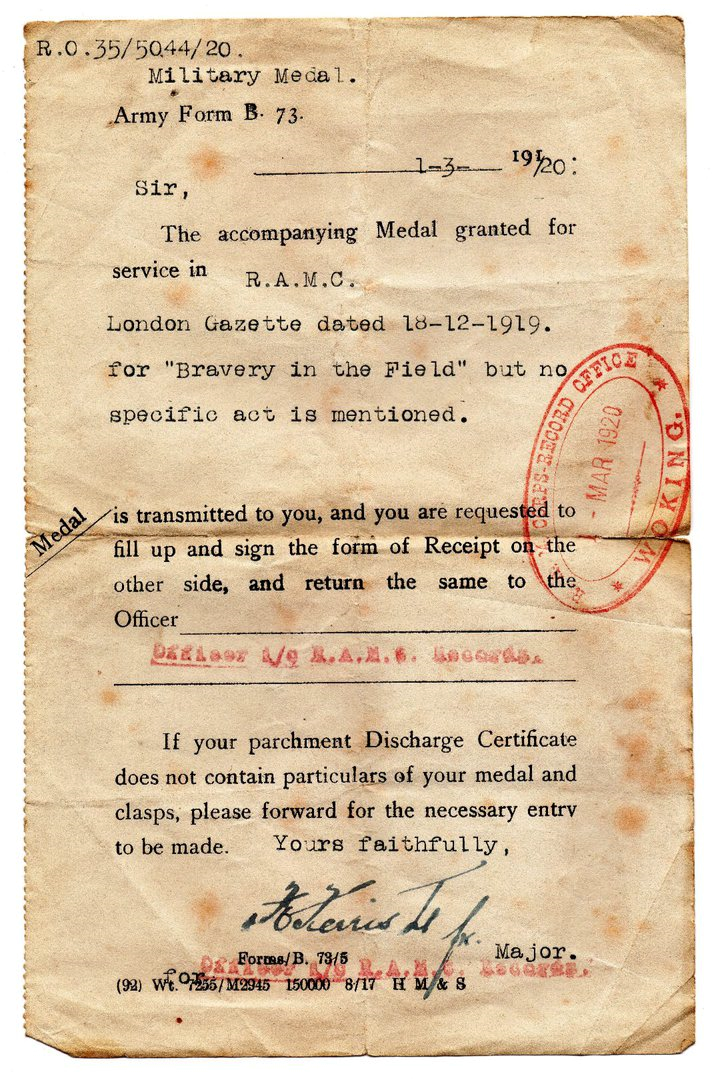 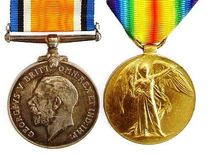 All men who served in the main theatres of war qualified for the British War Medal (on the left), also known as squeak, as did those who left their native shore for service in, for example, India.

The medal is silver and circular. A truncated bust of King George V is on the obverse, while there is a depiction of Saint George on the reverse.

The soldier's regiment and number are inscribed around the rim.

It was decided that each of the allies should each issue their own bronze victory medal with a similar design, similar equivalent wording and identical ribbon.

Approximately 5.7 million victory medals were issued. Interestingly, eligibility for this medal was more restrictive and not everyone who received the British War Medal ('Squeak') also received the Victory Medal ('Wilfred').

The recipient's service number, rank, name and unit was impressed on the rim.